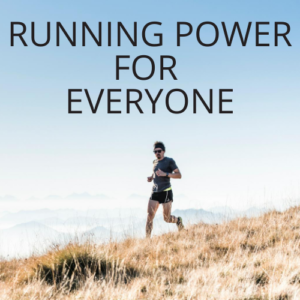 Probably we all know the discussions about the right training control: Should I look at heart rate, pace or power? The discussions will probably go on for a long time and everyone has their point of view. We at RUNALYZE also have a clear point of view: we don’t try to give you a particular training philosophy. Those who want to train according to heart rate should find all the necessary tools, as well as those who want to train according to pace or power. We are now one step further along this path because we now have power data for all runners.

Power data recorded by the device or additional sensors (such as Stryd or Runscribe) have been imported and displayed for a long time. The automatic estimation of power data, if no recorded data is available, was previously only available for cycling. We now have such an estimate for running activities as well.

Power estimation based on slope and weight

Using methods from GOVSS (Gravity Ordered Velocity Stress Score by Dr. Philip Skiba), which are mainly based on the grade adjusted pace, we are now able to add estimated power data to every running activity (that has pace data and an elevation profile). The exact methods are described in Calculation of Power Output and Quantification of Training Stress in Distance Runners: The Development of the GOVSS Algorithm (Skiba 2006).

This method is kind of state of the art, as Runscribe utilizes it in their example calculator and known apps like Running Power Estimator (for Garmin Connect IQ) and Running Power (for Movescount) use it as well.

The main input variables for the algorithm are the weight of the runner and the elevation profile. The last weight entry is used as the weight. The accuracy of the estimated values depends strongly on the accuracy of the elevation profile. Good results can be expected with barometric data. However, those who use GPS-based or satellite corrected elevation data will have to live with corresponding inaccuracies due to the poor gradient data.

To be transparent about shown values, we indicate calculated power values by this little icon:

Checkout the features of RUNALYZE and go ahead and create your account for analyzing your activities at RUNALYZE.com for free.